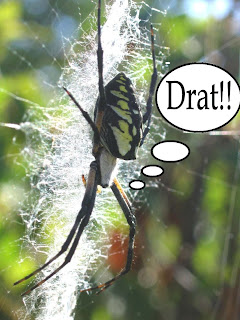 It looks like Argiope may be heading back to the shelf for a while so that I can...

1. Work on other projects with a higher likelihood of being completed sooner.
2. Rethink Argiope and where it is going.

One of the main problems is that I stepped back and read some of the work I've managed to accomplish this week and discovered that it was so different in tone and manner than the rest of the book that it was unusable. I realized I had really started to go off the rails with this project and that I need to back up and wait till I have a clear idea of where I'm going before I proceed further. Sometimes I can do good work writing by the seat of my pants, but this project is simply not working out that way.

Even worse, I realized that the original ending I had vaguely envisioned for the novel wouldn't work at all...primarily due to the fact that I had only vaguely envisioned it and started heading towards it without really thinking it through. When I sat down last night and actually pictured the scenario point by point in my head, I realized it was completely unworkable.

The thing is, being shelved is not the same thing as being abandoned. There is already eighty thousand words of work in this book, so I'm not just going to can it. I'm simply putting it aside until I can come back to it and do it right.

Well, that's actually what I'm going to get serious working on. Putting some real effort into finding out what I can do  next that will have a high chance of successful completion. I need some production to point at. So for the next few days I'm going to buckle down and do some serious brainstorming, outlining, and research. I need to think, and think hard. Hopefully, I'll have the beginning of some answers by my Friday update.
Posted by D. Nathan Hilliard at 11:31 PM