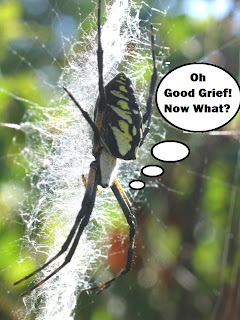 So I'm about halfway through a scene in Argiope that will probably not even make it into the book. It's a scene where the Cole County Sheriff has returned to a farm where the farmer and his wife mysteriously vanished earlier, and now he's taking a walk around the place and trying to piece things together. He encounters something very strange and leaves in a hurry. As a bit of a homage to my first story to ever reach print, the scene (and the one where the farmer initially vanishes) takes place on the same farm as the one in the story "Storm Chase." As a matter of fact, the farmer that disappears is Curtis March...a relative of the Bernie March who meet his own well deserved fate in the aforementioned short story.

I can do this because many of my short stories, and Argiope, are set in the same fictional area of Cole County, Texas.

The scene itself really doesn't add anything to the book other than to be a break between too many consecutive scenes with the main characters. Not to mention, it adds the complication of involving a whole new character that the story really doesn't need. And I would have to come up with a reason why a law enforcement officer wouldn't come back later with backup, which would mess up the whole story. Since I'm something of a stickler for stories at least making sense within the framework of the scenario they have created, this scene is pretty much doomed.

At the same time, I'll probably go ahead and finish it just to get it done...and possibly reinvent it later with a different character that wouldn't complicate the story arc...perhaps an heir to the farmer. After all, using some nobody character frees me up to even bump him/her off if I feel like it will improve the scene. And the whole point of the scene is simply to add an air of menace to a situation that the reader hasn't had fully explained to him yet...and improve the flow of the story by breaking up the continuous main character scenes.

But things are being done and writing is happening...and I guess that's all that matters.

Happy Humpday, Folks!
Posted by D. Nathan Hilliard at 12:01 AM