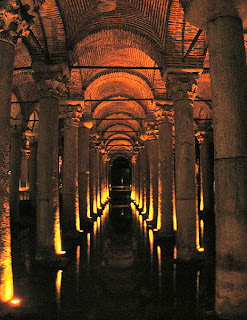 Tonight I worked on part two of "The Ways of Khrem." It's titled "The Cistern."
.
This story is designed as a bit of a bridge between the novellas on each side of it. It gives a bit of Cargills history, and it also allows him demonstrate some the skill and knowledge he picked in his former life. It also allows him to grow as a charactor . . . as he realizes to his horror that he has a conscience after all.
.
Interestingly, this story gets the most mixed reviews, and they seem to be mostly (not totally) gender based.
.
Cargill goes into detail on how he is arranging a system of ropes and knots to lower himself into a subterranian room to rescue a child . . . a rescue that gets complicated by an unwelcome intruder.
.
A lot of my female proofreaders were put off by the explanations of the system he improvised with the ropes, while the males seem to think those explanations were absolutely necessary. I have wrestled with the matter of those ropes a lot, and have tried to simplify it as much as possible.
.
Anyways, I got another ten thousand word chunk of work done tonight and finished "The Cistern." If I have time later, I may come back and look at the rope thing yet again.
.
For now, it's time to move on to part three . . . "The Ghost of Candlewalk Lane." Almost everybody thinks this is the best of the three, but it can still use work. It's certainly the deepest of the three as it deals with loss, vengeance, and justice.
.
On another note, the Cowboys were creamed by the Vikings yesterday. The Vikes were simply the better team out there. Oh well, it shows the Cowboys have improved by simply making it that game, so they are heading in the right direction. Now they just need to get even better.
Posted by D. Nathan Hilliard at 4:03 AM