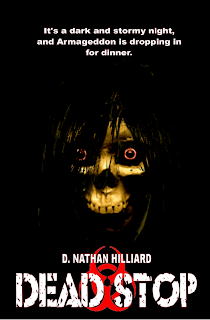 Another review on Dead Stop, this time from a site called Quirky Zombie.

She points out something that I consciously decided to do in Dead Stop. Like her, I had noticed that characters never seemed to get injured in zombie stories. They either got killed, or they were motoring along with nothing but maybe a scratch here or there. I thought it would be more realistic for characters to get hurt, and for a group of survivors to have a number of wounded to contend with.

On another front, I have crossed the 120,000 word mark on Argiope. There is still quite a ways to go, but at least I now have all the forces involved heading towards each other. At this point I have the main protagonist learning his new girl's tragic backstory. That kind of thing.

I have also tentatively changed the title to A Dance of Spiders, but that is nowhere near set in concrete. Yet at least I now have enough confidence that I may actually finish this book that I'm starting to consider covers. For instance... 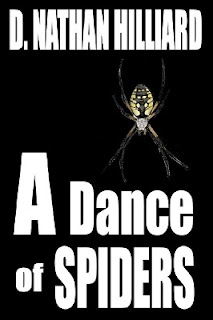 It's a bit simple, and doesn't make the greatest thumbnail, but this is how things start. Such is the lot of being an indie author. You have to wear a bunch of different hats to get that book to the public. And one of your main goals is to end up with a product that DOESN'T look like the work of an indie author.

There is a lot of work ahead.
Posted by D. Nathan Hilliard at 11:44 PM