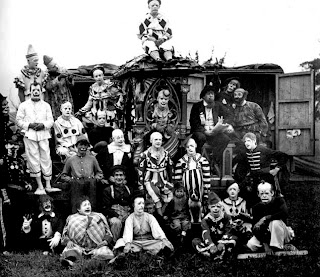 I loved eighties horror movies. Halloween, Friday the 13th, Sorority House Massacre 256 ½ , and any other rated R hack’n’slash that I could sneak out of the house to go watch. They were funny, scary, and a bit of a forbidden delight. And the surprising thing is, often the original movies in those franchises were pretty good.
But as the franchises wore on, what seemed to be a universal constant started to creep into them…a constant I call the Retarded Victim In Waiting. While in the original franchises the victims were often the “bad” girls due to the director trying to exploit some moralistic foible of the audience,  later on they chose to focus on the gratuitous which meant they needed a broader range of victims.

So apparently they chose morons.

You’ve seen them. The girl in her nightgown aimlessly wandering alone through the dark house wondering where all her friends disappeared too…the group of terrified teens splitting up to do different things AFTER they already know there is a killer on the loose (I call this the Scooby Doo effect)…the terrified idiot running OUT of the house once it’s been established the killer is not in there with them…etc.

Now don’t get me wrong…people often do stupid things, but it seems these acts of idiocy have nothing whatsoever in common with the character presented to the audience until they commit them. They are presented as perfectly normal folks who suddenly decide “Hey! I want to die like an idiot!” Okay, actually that’s not right because they are often not presented to the audience as much of anything at all, other than an item on the carnage buffet. You could usually tell who was going to die simply over how much effort was put into their character development.

And I really try to avoid that because it sucks all the fear and suspense right out of the scene when it happens. It’s when the character does the right thing, and it doesn’t do any good, that things get scary. I think one of the most effective scenes in the original Halloween was when Laurie Strode did the sensible thing and ran to her neighbors for help, only to have them turn off the porch light because they thought they were the victim of a Halloween prank. That’s when the things get scary.

That doesn’t mean I haven’t had characters make mistakes or do suicidal things, but I try to do it within the context of their personality or circumstances. When Gerald runs for his car in Dead Stop, it’s because of his psychology…the monsters he sees inside the truck stop have become scarier to him than the ones outside. Holly follows him simply because that is who she has become, and she realizes that as she does it. In a way, it’s a liberating moment for her (at least internally) even as she is doing it. When Deke screws up and illuminates himself with the glow stick it’s because he isn’t thinking things through because he’s an insecure young man focused on proving himself to still be a valuable member of the group. So when he finds the purse, he acts out of triumph at his success before thinking. Nobody in Dead Stop dies due to simply acting stupid.

And the main reason for that is that I think there is a symbiotic relationship between the monster and the victim. A monster is only as scary as the victim he threatens. And let’s face it, by the end of some of these horror franchises we were being given line-ups of victims that would have had a tough time surviving an episode of My Little Pony.

So victims matter! They need to have back story. They need to not be idiots. The audience needs to be able to connect with them in some way before they meet their demise, or their death will fail to establish the monster/killer/threat as the fearsome entity you as a writer want it to be.
Posted by D. Nathan Hilliard at 9:24 AM