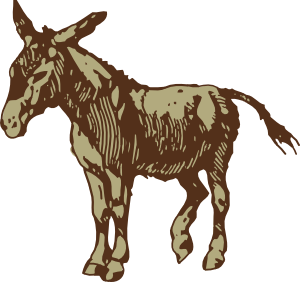 Writing has been slow this week, but it has been happening.

Apparently my muse has decided to take on the role of a mule. One that has to be bribed, cajoled, threatened, and flogged just to keep a slow plodding pace as it plows the back forty. It's being ornery, but I'm managing to get it started again after each frequent balk. Writing is getting done. Just not a great deal of it at any one time.

At the same time I'm getting some useful reading in. I'm currently reading Stephen King's "On Writing." I reasoned that a guy as successful as he was might have a clue what he was talking about. As it turns out, the book is a delight, and it's encouraging to realize how much I have in common with him. Now if I can just extend those commonalities to include wild success in the field of writing, I'll be happy. As it is though, the book is very helpful and I recommend it to anybody who writes.

Anyways, hopefully today I will finish the scene in Dead Stop that I've been plodding through all week. Two of my protagonists have entered the dangerous side of a truckstop, where a zombie lurks somewhere in the dark, in an effort to close the doors and keep the others out. It's kind of interesting how the scene is turning out different than I originally plotted it. Maybe Stephen King has point in his disdain for plotting. Hmmm....

On another note, I went to my son's open house at his school last and met his two charming, lovely young teachers. And as I talked with these wonderful ladies, it occurred to me how much the world has changed. My third grade teacher was a blue-haired old battleaxe with a glare that could stop a T-rex in mid charge. When she snapped for everybody to be quiet, nature went into a hush for a half mile around her. The rumor amongst (is that still a word?) my classmates was that she kept extra kids in her basement that she beat every morning, just to warm up for the day.

Oh well, the weekend is here. Have fun everybody.
Posted by D. Nathan Hilliard at 8:34 AM