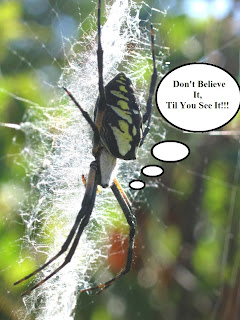 Progress is happening on my novels. It's slow, but it's happening.

It's funny, somebody read a short story of mine called Picking Dewberries and commented on my use of spiders. The truth is I've written about eighteen to twenty short stories, and spiders figured in exactly one of them...BUT...that's the story that I took as an idea to base a novel off of. When I wrote Picking Dewberries...which can be found in the Dreamspell Nightmares Anthology (the paperback is on sale right now for $2.83)...I realized that the story created a problem and wondered how to resolve it. If these creatures existed, HOW did they continue to exist? From that musing arose the story of Argiope, which in many ways is the continuation of Picking Dewberries. As a matter of fact, I'm using Picking Dewberries as the placeholder prologue until I finish the story and can go back and create a distinctive prologue for the novel itself.

The other novel I'm working on is Dead Stop...and again it finds some of it's origin on one of my short stories. Sometime later this year, Dreamspell Nightmares 2 will be released and it features three more short stories of mine...three of my better ones actually. One of those is called Under A Racer's Moon and is the story of two young men in a race against something otherworldy. It's one of my favorite stories. And the two main characters in this story are where I drew the inspiration for the two leading men of Dead Stop. Harley and Deke of Dead Stop owe much of their character to Hocker and Eddie from the Short Story.

So my short stories kind of becomes resources I can look at for bigger projects. I wonder if other writer's do that? In my case, the short story exists because it encapsulates a fairly basic scene or idea that I had. If you have ever read Storm Chase, the first story in Wind and Dark Waters, you will notice a distinct pattern of behavior in the movement of Charlotte March that occurs again with Moonstone Maddy in The Ways of Khrem. Short stories seem to be my testing grounds.

Sadly, it's been a while since I wrote a short story because I'm now gritting my teeth and trying to get a novel or two out the door. But I look forward to being able to play with ideas again.
Posted by D. Nathan Hilliard at 8:24 AM