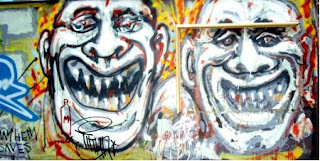 Does humor belong in horror?

I think it depends.

Humor is a tool, and I think it's important to keep that in mind when you are writing your story. The first question you have to ask yourself is, "Does humor even belong in this story?" Some stories it will add a range of emotion too, others it will ruin. If you are trying to create an atmosphere of unrelenting fear, humor can go a long way towards screwing that up.

That's not to say that humor will dispel the fear in a story. If done well, it simply provides a counterpart to the suspense. In some cases it can even be employed by a character as a way of trying to alleviate his fear, thus underscoring the direness of his situation if handled well. Kind of another way of whistling past the graveyard. But handling it well is very important. Overdo it and it ceases to become a horror story. Do it lamely and it could actually spoil the story. Lame humor has a way of seeping into the rest of a story and making it lame too. If it doesn't work, better to cut it out.

So ultimately, I think humor does help a lot of horror stories. As long as the writer remembers that it's an ingredient, and not the goal of the recipe.
Posted by D. Nathan Hilliard at 12:47 AM