So I'm Going On A Spider Hunt 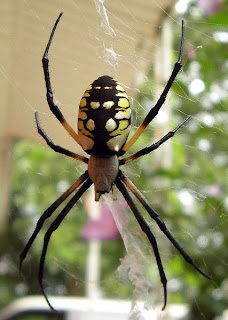 One of the joys of being an indie writer is being responsible for absolutely everything. This includes book covers.

As an indie, you pretty much have two choices when it comes to those. You can either find an artist online to make a cover for you, or you can make your own. Both are reasonable paths, but the second is only reasonable if you have taken the time to learn what works in book covers, what's necessary graphically, and you have at least a passing grasp of some photo editing program.

Fortunately, (or unfortunately) I fall in that category so I do make my own book covers. But being responsible for that means this author ends up doing some pretty silly stuff that doesn't always have much to do with writing. For instance, I'm about to grab my new Fujifilm SL1000 and go hunting a bunch of the above pictured spider.

You can't just grab any old picture of a spider off the internet due to copyright issues, and there are very few pictures that would have worked for what I needed anyway.  The one above is the closest I have found to an acceptable subject that was public domain. I had found one that would have worked but unfortunately couldn't get commercial rights to it.

I need a large 12 or 16  megapixel positioned and posed pretty much like the one above.Yes, that would be a huge picture, but if you're intending to make a bookcover that's going to look professional at 300dpi you need one that size. I'll also be carrying a solid green or blue piece of construction paper to put behind the subject when I take my picture so it will be a lot easier to remove everything but the spider in the photoediting program later.

So if anybody out there knows where a bunch of these are near north Houston, feel free to let me know in the comments. I'm gonna be going on a "bug hunt" soon :P

The novel is still in the editing stage, and being gone over by proofreaders yet again, but it is still on target for an autumn launch. Woohoo!