Welcome to the Hotel Raccoon 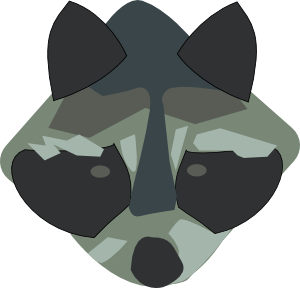 This is beginning to get seriously stupid.

I thought we would have had at least a little time since capturing the last raccoon in our attic before we needed to nail shut every hole into the place...but noooooo! Just a few days ago I got treated to the sound of scampering, thudding, and clomping going on above my head while I lay in bed once again. How the hell does a raccoon "clomp" anyways?

So out came the trap, and for lack of anything else on hand I baited it with vienna sausages. I realized last night that was probably a dumb thing to do since the sausage would only take about 24 to 48 hours to spoil and start to stink...but it was too late and the deed was done. I didn't look forward to crawling back up there to scrape the melted and mouldered gunk out of the little can, but fortune smiled on me...

This morning I awoke to the sounds of a raccoon testing the bars of the cage. Apparently this fellow wasn't as bright as some of his predecessors, and wandered straight into the trap. Or maybe raccoons have a weakness for vienna sausages. Who knows. Personally, another and even more sinister possibility rose in my mind as I transported the little booger out to the car.

Was this the same coon as before? Was he partying with the coons in the park, then crossing an entire neighborhood full of houses, yards, and dogs to come back to this attic for a while before wandering back into the cage for another free ride to go hang out with his friends again? Am I running a hotel for raccoons in my attic?

As I watch the released the raccoon in the video below, I couldn't help but wonder if this guy hadn't been through this before.

Anyways, I'm just kind of doing little bits of work on Dead Stop and Black Mattie. I'm taking it easy, and experimenting by picturing things in my head before writing them down. I think that's one of the things I missed about the early enthusiasm of my first stories...the fact that I was so clearly seeing them as I wrote. I'm working on getting that back.
Posted by D. Nathan Hilliard at 12:24 AM