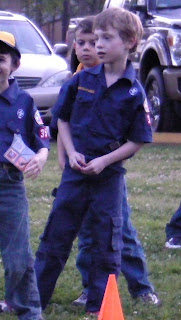 Eight years ago today, Sheridan came into this world.

He arrived almost three months early, at the astonishing weight of two pounds and six ounces. He was so tiny that other newborns I saw being carried in the hospital looked huge by comparison.  Karla and I were probably some of the most scared and worried parents on the planet.

But he made it.

And that thin tiny cry he uttered eight years ago has been replaced with a high volume, non-stop torrent of chatter and "kapows" and "bangs" and god knows what all kung fu and space opera noises the young human mouth can make. But he's healthy, and happy, and his heart is in the right place. He's a good kid, with a fast and agile mind that makes him think bringing home straight A report cards is child's play. I couldn't be a happier or prouder father

Over the years I've watched his passions morph from Cars...to Wall-E...and now to Star Wars. Where he once sat enraptured in front of the TV by the exploits of Dora the Explorer, he now punches the air along with the characters of Dragon Ball Z. As a three year old he used to sit in my lap and ride the rollercoasters with me that I built on the computer with Roller Coaster Tycoon 3...nowadays he builds his own on that same computer. Things change...but they're changing in good ways.

He's getting taller, and louder, and faster, and I love every second of it. Eight is a good year, and I hope he has a great one.

Happy Birthday, son. I love you.
Posted by D. Nathan Hilliard at 1:06 AM