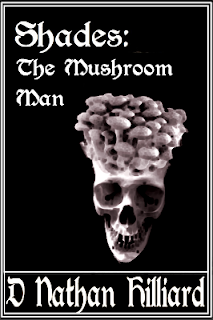 The first draft of The Mushroom Man is done, and the editing as begun. I will do a little more cleaning up with it and then send a printout to one or two of my trusted proofreaders. Meanwhile, I have also been working on cover design as well. With any luck this might get published at the end of January or early February.

But that is not all that's coming along. Check this out...


Yep, that's right. She's reading. This is actually the second time she read it, and she did an even better job the first time when it was her idea. This time I had her do it for the camera and I think she was wondering what was up with that.

We also had some plumbers come in yesterday and replace the faucet and valves on the bathtub. This turned out to be quite a tall order as all the parts were thirty years old, corroded, and fell apart in their hands as they tried to remove them. Then things got really complicated when they discovered that our raccoon in the attic can make it's way down inside the wall and hide between the wall and the bathtub. So they kind of blocked that area with some blankets so they could replace things without getting eaten by a raccoon. This worked well until the cat snuck in and rubbed on them. There was a bit of frenzy there for a moment,  but it all worked out.

They'll be coming back today to replace a bunch more stuff. Sigh. It needs to be done but our wallets are already crying "Uncle!"

I'm going to encourage my son to grow up to be a plumber. That way he can take care of me in style in my old age.
Posted by D. Nathan Hilliard at 12:33 AM