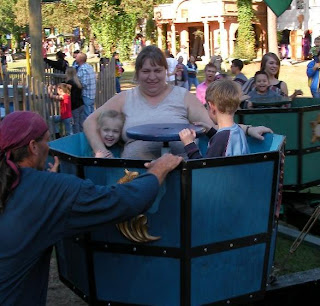 Another pic from Renfest. I think this was the best time Rowan has ever had at something like this.

I have written ten short stories this year. My goal is twelve. Yet now I'm sort of coming up dry when I go to the well. I've got a couple of ideas, but nothing I can put on paper yet. I'm wondering if it's time to start dusting off my novel and novella ideas and looking at them. Why not? I'm going to have to do it anyways. And if a short story gels, I can still do that. I'm still kind of unsure though about risking a goal when I've gotten this close to it. Oh well, I'll think about it.

I called up the first part of my old novel, "The Ways of Khrem," and tried reading through it again. It definitely needs work. Way too much describing and not enough showing. The dialogue really needed help too. It improves as the story goes along, which is at least a good sign as far as that goes. I think it can be rescued, but it's going to take work.

"Argiope" has a much stronger, and better written, beginning . . . but a beginning is all it has.

And "Flight of the Lark" still has a ton of research to be conducted before it can be tackled.

Still, those three are the strongest candidates to resume work on, with the top two leading the pack by a wide margin.