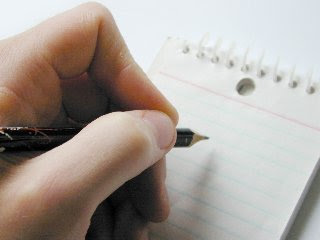 This is sort of a "part 2" to yesterdays blog entry. I want to focus on what I think is one of the most important things I listed yesterday. The thing I listed first.

This is the hardest part a lot of people face. And it's the most critical part of the whole enterprise.

Getting that first draft written.

Until you have something to work with, you don't really need to know anything else about the business. It doesn't matter who you know, what your marketing strategy is, what wonderful story ideas you have, or what you business plan is. You have to write that first draft before any of the rest of that can matter. And sometimes that can seem like the most overwhelming obstacle.

Sometimes you have to force yourself to write. I know I do. Sometimes I have to make myself sit down and type out a sentence. Then make another sentence follow that, and then another sentence follow that, without any real idea where I'm going yet. But sometimes that's what it takes to get something written. Inspiration is great, it really is, but I've written stuff just as good by the process I just mentioned. It's grinding, and it feels like you are stepping off a cliff with a blindfold on, but it does work. And success in this game is holding a first draft at the end of the process.

I doesn't matter if it's that good. It doesn't really matter if it stinks on ice. It's a starting point . . . which is something you didn't have before you started writing. You are writing on a computer, not chiseling on stone. You can change things and make them better. You are not committed to anything in that draft until you submit it to a publisher. And many times second or third ideas are way better than the first ones. That's why there are second and third drafts. I usually don't submit until I'm on my third or fourth draft. But you have to get that first one written before any of the rest can happen.

So sit down. Face that white page. And type that first sentence. Then follow it with a second. And then a third. And keep going.

See where you end up.
Posted by D. Nathan Hilliard at 12:11 AM
Labels: writing first draft