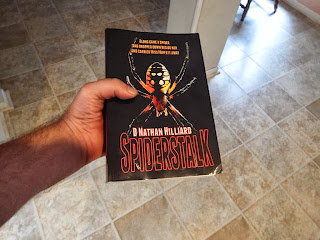 There was a package waiting for me on the porch when I got back from picking up the  kids from school today. I knew what it had to be the moment I saw it...my first authors proof of the new novel. With an excitement I know many writer's can relate to, I hustled my prize into the house and tore it open. And after a quick perusal of the results, I found myself startlingly pleased with the outcome.

The cover works. As a matter of fact it works well enough that I can pretty much accept it as is. That is a first for me. I had to tweak and re-upload the cover to Dead Stop four different times. But it gets even better..... 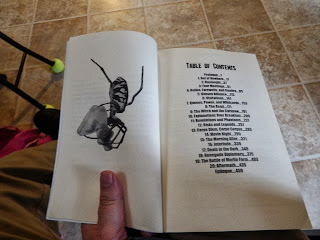 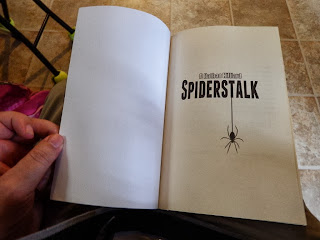 ...I can now put graphics in the books from Createspace. This allows me to make a more stylized interior title page, and it also allows me to include a piece of art rendered by my niece Courtney. (it also reminds me I need to give her credit for that piece, so there is one small tweak to the interior documents there). The ability to include graphics opens up other possible avenues in future projects as well. It might be kind of cool to have my next anthology with one or two illustrations per story. Maybe even redo Shades.

Oh, and it also allows me to do one more thing... 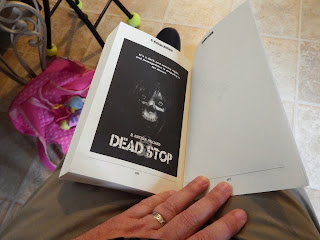 Yep! Advertise! Maybe in the future, as I get more proficient at this, I might figure out how to resize these things so I can include text on the page as well. But for now this is a big step forward for me so I'm very happy.

I intended to start a last reading of it tonight, in order to give it one more proofing, but a slight complication arose. My son, snatched the book as soon as he got the chance and scurried off with it to read. Seeing his glee at holding a book that his Dad wrote only multiplied my own internal glow by a power of a hundred. Yeah, it's a book with gunfights and big giant spiders but I was into that kind of stuff as a ten-year-old too.

So I am heading towards the end of another long journey with the destination being another published novel. Unless I encounter something really awful, there is a very real chance that I may only need to make some minor tweaks to the manuscript and interior....which means I might not even need to order another proof. I'll just have to see how it reads once the boy goes off to school tomorrow and I can get the book back. If so, I might be able to turn to formatting the ebook on Monday.

So as things stand, a late September or early October launch still seems to be in the cards.

It won't be long now.

UPDATE: Leave it my ten-year-old son to spot a couple of cover flaws that need to be fixed. Oh well, a second proof was in the works anyway :P