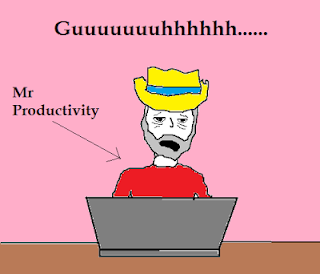 Well, after an illness that lasted almost three weeks I seem to be on the road to recovery....although it might be best to think of it as a muddy, backwoods dirt road. I had been sleeping inordinate amounts of time for a period of about two weeks before the bug finally blossomed into full plague at the same time my inlaws were visiting from Ohio. (Sorry about that Carl and Lu) But now the crud seems to be on the wane, and life totters on.

Needless to say, I haven't been very productive. But I haven't been totally inactive either. I'm finally closing in on what I think are the last couple of thousand words on a novelette I've been struggling through. I hope to finish the rough draft in the next day or two. It's designed to stand on it's own, or be the prologue for a future novel I have an idea for. Once done, I'll let it sit a few days before editing.

Sometimes I think being unproductive can become self reinforcing. I originally stopped writing when I started editing Dead Stop for publication. Then I spent the autumn focused on promoting it any way I could. I knew I needed to get back to writing, but it seems like my brain can be in either promotion mode or writing mode...not both. Something I'm going to have to consider, and somehow deal with in the future. But the thing is, more and more time kept passing without me writing anything, and for some reason that made it even harder to get started again.

I'm hoping that finishing the rough draft of this novelette will get me back on the right track. When I say rough, I do mean rough...it definitely needs some serious going over and editing...but even the small victories matter. Currently it's slated for inclusion in a hazy future anthology that would sort of be a sequel to Shades. Only this one would be about monsters instead of exclusively ghosts. But nothing is set in concrete.

Oh well, that's my update and lesson for the time being....

"WARNING: FALLING OUT OF THE  HABIT OF WRITING IS BAD"
Posted by D. Nathan Hilliard at 8:21 AM