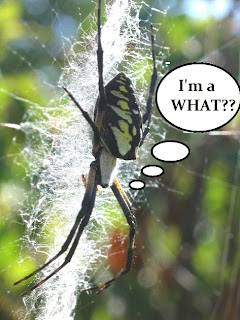 Every author probably has one.

That manuscript that sits unfinished on the shelf. The one that gets pulled down time to time, and grumbles that he needs to finish what he started. The one that goes back up on the shelf as another idea which shows more promise of actually getting finished comes along. The one that soon finds itself labeled as "that project," whose sole purpose now seems to be something to grouse over between other projects.

In my case, it's a project carrying the placeholder title of "Argiope," and now that I have finished "Dead Stop" it has inevitably returned itself to my attention. And since it is the last of my old projects, I guess it should.

It's the story of a man who recovers from a car accident with  moderately disabling injuries only to discover that his brother and family have disappeared on a family outing. Not long after launching a search with his own funds, his detective suddenly turns up dead and he is nearly killed himself in attack at his own swimming pool. Then things go from deadly to unbelievable when a woman shows up the hospital and shoots her way through an entire squad of police officers in an attempt to kill him. He also learns there are real monsters in the world.

I'm about 85,000 words into this story, but the original ending I had just didn't work and as I realized that the writing ground to a halt. I estimate this to be about a 135,000 word novel, so if I ever finish it would be my largest to date.

So once again, I'm going to try.

Since other writers will be doing Nanowrimo in November, I'll be doing my own version as well. I will dedicate November to the effort of trying to get Argiope closer to completion. No promises. No guarantees  Just the resolution to spend a month trying and seeing how it turns out. The idea is that by the end of the month I'll know I have something I can finish or something that needs to go back on the shelf.

This gives me three days to mentally prepare myself for this. That's actually an important part to writing sometimes. Sometimes it flows from the start...but sometimes it takes a little firm resolve and a vow or two. Or as my friend Lenka puts it...you have to push off from shore.

I'll push off from shore with Argiope on Nov 1. Then I guess we'll see where we land.