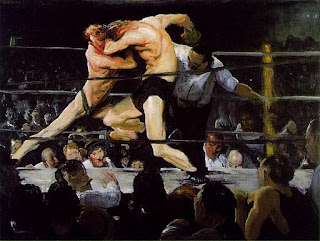 So my laptop is still languishing at Geek Squad, and I don't expect it back until Friday or next week. So what is a writer, who can't really use a pen or pencil, to do?

I have been reading them for a week now, and I'm a little over halfway through them. I have met Conan the Barbarian, King Kull, a couple of hard nosed detectives, and a rather lovable gorilla of a sailor/boxer named Steve Costigan.

And thews....lots and lots of muscles and thews.

Iron thews. Knotted thews. Massive thews. Bull necks. Huge shoulders. You get the idea. I find it odd how a man who had such a wide range of prose and setting, could get into a bit of a rut when it comes to the attributes of his main characters. Because Howard could actually write...and rather well. His imagery and prose was very polished, and conveyed a powerful sense of setting and atmosphere. It's just that after about forty stories, I've pretty much met his main character before...with the exception of the boxer Costigan, who still had plenty of thews but an entirely different voice than the others. Even his detectives are pretty much Conan in a cheap suit.

Sadly, Howard was also a man of his times and there are places (especially in the stories set in his present day) where the writing crosses the  line from understandable political incorrectness due to his times to outright racism. I despise much of political correctness, but I was getting uncomfortable with some of this. So there is that. But he was a good writer.

So I will continue with  my reading till my laptop gets back, for if nothing else the works of a good writer can often inspire new stories from a different writer. That's what I'm hoping for.
Posted by D. Nathan Hilliard at 8:37 PM
Labels: conan, kull, robert e howard, thews