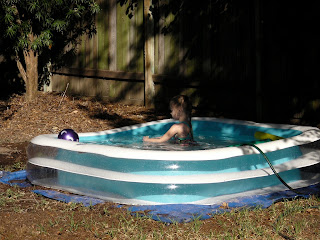 As we head deeper into June, the kids are starting to adapt to their new surplus of time at home...and I'm starting to adapt to them. Sheridan has been busy splitting his time between the backyard pool, the Wii, the computer, and watching DVDs and cartoons...while if Rowan had her way she would probably just set up a mailbox by the pool and move in.
She doesn't care if he's out there to play with her or not. She is just enamored of being in the water and playing with it.
Also, another benefit of having Dad being the one home to take care of them is the fact that I'm the one who makes summer lunches...such as the one pictured below. 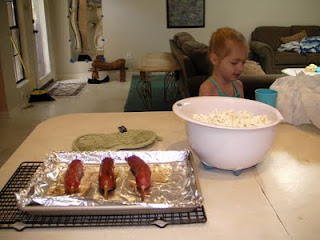 Hey, sausage on a stick and popcorn qualifies as nutrition, and the kids are convinced I'm an enlightened adult when it comes to menus. They sang my praises while the stuff was cooking.
And I'm still actually getting a little writing in. Not a lot...nowhere near my old pace when things were moving...but still enough progress to make a difference. At least enough that I can honestly say the project I'm working on is moving forward. It's just being done in snatches here and there, and I'm sure that will show during the editing. But that's okay. Progress is progress.
And the time with the kiddos is worth it.
It may be cutting into my writing time, but I'm beginning to think that keeping busy and doing things with them is stimulating the old creative cells. I'm starting to notice things while I'm out with them, and looking at those things with an eye towards using them as elements in future stories. For instance, I was at McDonald's with Sheridan while Rowan was with her therapists, and I noticed this woman in another booth keep making the same gesture with her hand while talking. It occurred to me that I ought to experiment with adding personalized gestures to certain characters...just to make them a little more human and distinct. So this might actually end up helping in the long run. We shall see.
Until then, enjoy this clip of a very quiet little girl enjoying her summer in a backyard pool...no pesky brothers required.