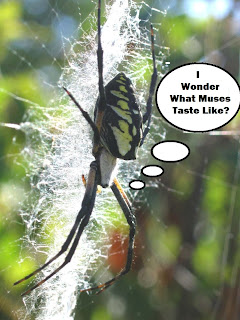 If I ever catch my muse, I'm going to kick her dead in the butt.

After struggling for two months over a couple of issues that had me bogged down in Argiope, I had a neat little brainstorm come out of nowhere that neatly resolved all the problems and gave me a bonus action scene to boot....and it came to me right in the middle of my son's Cub Scout meeting where I was expected to be a dutiful parent and pay attention to my kid so he would stay on task. Aargh!! I could barely stay on task myself after that. The meeting kept going on and on, and I was dying to get home to my laptop! But it was all in a good cause and the boy was exposed to lots of scouty goodness. And I somehow made it through the meeting without having a stroke or some kind of breakdown.

Still, the good news is that I have a way forward with Argiope again. I need to do some plotting to figure out how to implement this idea the best way, but I already know it's going to work. Woohoo, I love it when things are working out. It makes me feel like I might actually be in the right line of work after all.

On another note, I'm going to go to Sheridan's school and have breakfast with him this morning. He's been asking me to do this for weeks, and I've just confirmed with the school it's okay. I think it's great and I intend to take advantage of that opportunity while he still wants me to be part of his world. I know someday that will likely change, so it's best to make the most of it while being the parent hasn't yet cast me as the Great Evil Oppressor. Sheesh, listen to me...I sound like I miss him already.

Oh well, now it's Tuesday and we're back to Starbucks day. Maybe I'll get some good writing done while I'm there. Have a Happy Tuesday, folks!
Posted by D. Nathan Hilliard at 12:01 AM