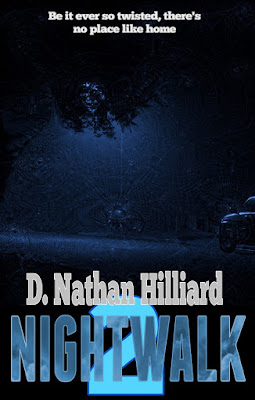 That's just a placeholder cover until something better occurs.

I have never written a sequel before, but I have had sequel requests for each novel I have written. Since the world of Nightwalk was freshest in my mind, I thought I would do some writing on ideas for that while I outlined another original novel project and prepared to get serious on that.

But a funny thing happened during the outlining. The writing on the sequel started to take off and get more of my attention each day. And since I had been fighting a season long case of writer's block all autumn, instinct told me to start going with where the action was happening.

So it appears we may all be going back to Coventry Woods.

I'm still early in the project, but the proofreaders are liking what they see so far and I put a lot of stock in their opinions. I've had a late start on it, so the odds of having a rough draft by the time the kids get out of school for the summer are minimal. Then there is the fact the CMT in my hands has gotten more pronounced so I'm typing slower than ever. That's why I'm predicting a winter release this time. I prefer early autumn, but I just don't see it.

Still, I have settled on a project and getting on with it.