The Monster in the Shadows 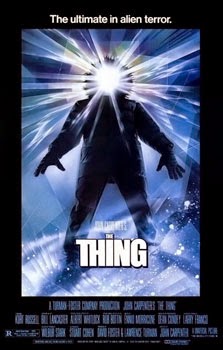 Last night, in a rite of passage of sorts, I celebrated the Halloween season by sitting down with my son and watching a horror movie.  After carefully weeding through the possibilities to eliminate the ones with nudity and other sexual content that us parents object to, I finally settled on John Carpenter’s, The Thing.

It’s an unusual movie in that it is actually scary, yet doesn’t contain a single female character (which means none of that aforementioned nudity). There’s blood and gore, but most young buys are more than capable of dealing with that. The language is a little rough, but if you’re going to watch a horror movie with your kid you have to make some concessions at some point. This ain’t Disney, after all.
Anyway, we both enjoyed the film and had a high old time pointing things out and eating popcorn.

But while I watched the film, I also found myself comparing it to the “prequel” that had been made only a year or two ago. That one hadn’t been too bad, (actually, it was better than I expected it to be) but this one was so much better. And as I realized that, I watched the film closer and tried to work out why.

Both movies were competently acted. And I will give the prequel credit for doing things to set up what was found in Carpenter’s movie with only a couple of objectionable exceptions.  Personally, I think if you are going to go that direction then it’s the writer’s duty to go ahead and nail it without leaving ANY big things that don’t fit. It wouldn’t have been that hard. But that was a personal quibble on my part and I don’t think it’s what made the “prequel” an inferior movie.

In the end, I think it all came back to the CGI. Now (full disclosure) I’m not a fan of CGI in most horror movies in the first place, but I’m not totally sure the CGI itself was the total problem here. The only VISUAL drawback I noticed with the CGI was that in comparison with the monster in Carpenter’s movie, the one in the prequel simply wasn’t as wet and slimy. There was also that feeling of “not really there” that I sometimes get with CGI as well, even when it is seamlessly done.

But the real problem wasn’t so much the CGI as the decisions it led the movie makers into making. CGI allowed them to have the monster rampaging through hallways and stalking people through rooms…therefore that’s what they did, and I think that was their mistake.

There are two types of monsters in monster movies. There are “monsters of the shadows,” that only appear from time to time out of the darkness or from offscreen (or in this case out of a person) and then do their thing and vanish…and then there are rampaging monsters who once they appear throw mystery to wind and go howling after their victims. (like the dinosaurs of Jurassic Park, for instance).

So when the makers of The Thing chose to use their newfound ability to release the monster and have it storm through the station, they changed its very nature. Sure, it was still grisly and doing disgusting acts of morphology with the human body, but now it was a monster of the shadows that was out of its element. Now it was out in the open and having to keep topping its last act of being scary and disgusting, while being cast in role of a velociraptor hunting prey.

The end result were scenes that weren't a total failure because they had at least been competently done, but were nowhere near as effective as the scenes in Carpenter’s move simply because they had the monster doing something it was never really intended to do. It was acting against type.

And I think that matters, not with just movies, but with books as well. I think when we as authors write a monster book, we need to be very clear with ourselves what type of monster we are creating. That way we can be careful to use them to their best effect. Because as authors, we are faced with the same quandary that has been the downfall of many horror movies that have discovered the shiny new toy of CGI...

…just because we can do it, doesn’t necessarily mean we should.
Posted by D. Nathan Hilliard at 12:05 PM