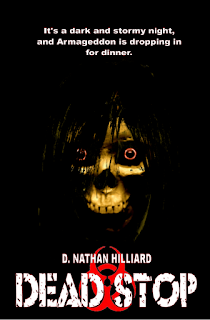 I have just uploaded a corrected manuscript of Dead Stop to Createspace. Lots of words were cut, lots of apostrophes were added (one of my proofreaders asked me if I had some kind of moral aversion to apostrophes) and some misspellings were fixed.  Overall, the manuscript is almost there. Once I get this author's proof back, I'm hoping it will pass a full inspection.

I also intend to upload a slightly altered cover (above) as well. It's pretty much the same thing, except the title and author part has been enlarged. This is to help it be more visible and clear on thumbnails. It does seem to be an improvement.

Last of all, an author named Dean Wesley Smith demonstrates a rather novel idea on his blog. He is making print copies of single short stories. I have a few of those laying around. Hmmm.....