It Had to be Done 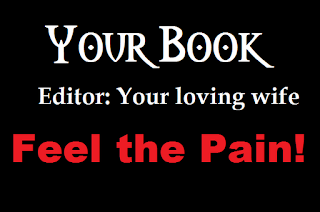 So I got my second proof of Shades in last week and started editing it. It seemed like a big improvement over the last one, and I couldn't find much in the way of errors. But as I read it, I had a queasy feeling I was missing something. I was doing my very best to see it through fresh eyes and catch anything out of place, but I just couldn't help feeling I was missing something.

So my loving wife, Karla, agreed to sit down and read and edit one of the stories in the anthology...just to see if I was missing anything. I knew this was a sacrifice on her part, because she hates ghost and horror stories, and I was careful to pick out the one I felt she would find the least objectionable. I just really needed a fresh set of eyes to see the book before I declared it ready.

So, she sat down and started reading.

Almost immediately, the yellow highlighter was whipped out and she started marking. As I watched in dismay, more and more marks were made on the story as she read through it. It was torture. At last she was done, and I took the book back and surveyed the damage.

While a couple of the marks really amounted to stylistic difference of opinions, the most of them were entirely justified. Some were even painfully obvious, and I still can't believe I missed them (three times!). And while the number of errors wasn't truly horrific, it was enough that she felt compelled to offer to edit the other stories of the book in order to make sure it was ready before I hit publish. Looking at all the yellow marks in the story, I had no choice but to agree...although we also agreed she didn't have to read two stories that I know she would have found the most upsetting.

So she went back to work.

The marker flew. Observations about certain tendencies I had in punctuation were made. Other observations about my usage of certain words were made. I was also dryly informed that one of my characters was "too stupid to live," which I took in good graces since I knew she hated reading this genre. Anyways, the deed was done and now I need to go back through the two manuscripts (ebook and softcover) and incorporate her corrections. It will be a lot of work, but it's well worth it.

I want to get this right.
Posted by D. Nathan Hilliard at 9:23 AM